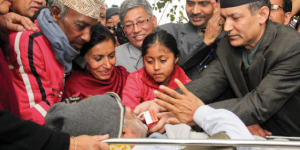 We arrived in Nepal on 19th January 2014, ready to do our medical elective at Tribhuvan University Teaching Hospital in Neurosurgery. Having made our way to our accommodation (a tiny, dingy twin bedroom in a backpackers lodge), we set up our makeshift dresser by hanging our shirts on the hatstand behind the door. Perfect! Just like home. After using the tiny lime green bathroom down the hall (and having no hot water, no shower pressure and no soap) we snuggled into bed to get ready for the next day – our first day of placement.

We arrived at the hospital bright and early at 8am. “Hmm,” we said to ourselves, “That’s strange.” We were looking at the main courtyard of the hospital filled with people in white coats, just standing around. Hanging from the buildings all around them were white signs and slogans written in Nepalese that we couldn’t really understand, except for one name seemingly littered everywhere - “Dr Govinda, KC”. Hanging from one window of a second story building was a crude manikin of a human made from straw and old clothes.  Not sure of what to do, we asked around, and soon discovered that the hospital was on strike – and had been for seven days. And low and behold, Dr Govinda was the head of orthopaedics at the hospital and leading the strike. But then we discovered something quite remarkable, and quite chilling – Dr Govinda was on a hunger strike – what the Nepalese people call a ‘fast-unto-death’. After frantically asking what this meant, we came to realise it meant exactly what it said – Dr Govinda was starving himself until he died, and had been doing it for seven days. We were shocked. Such a brutal way to make a protest! What could Dr Govinda and most of the Nepalese medical community possibly be so abject against?

As we were to discover over our time on the elective, the issue of healthcare in Nepal is a hotly fought over one. Nepal is primarily run as a communist country, although not as extremist as some in the past. But this means that one person has most of the power when it comes to the healthcare sector, and that the government in general has not been known for being the most upstanding and non-corrupt one that ever existed. The Institute of Medicine – the government department in Nepal responsible for running the health sector – recently appointed a new administrator, Dr Shashi Sharma, under very unscrupulous circumstances. Dr Govinda was claiming that Dr Sharma was really a puppet administrator, who could not and would not support the health care system, and instead support his ‘buddies’ in various other non-healthcare related sectors with kickbacks worth hundreds of millions of rupees. Dr Govinda wanted the previous administrator – Professor Prakash Sayami - reinstalled.

Every day we checked the morning paper to hear the latest. When would the standoff end? Who would crack first – Dr Govinda or Dr Sharma?

‘’How long can people survive without food?’ I pondered back to a blurry second year lecture.

Day 11 went past. We read the morning paper: ‘Dr Govinda has been admitted to intensive care due to falling blood pressure.’

“Unbelievable,” we thought. “Surely he’s going to give up. He can’t live much longer.”

Day 12. The Medical Association of Nepal shut down hospitals across the country, except the emergency services.  They called for mass resignation of doctors across the country and almost a hundred doctors and professors resigned, all in support of Dr Govinda. The doctors announced free medical camps at public places to support those critically ill members of the public.

Day 13. Still no change. Everyone was talking about this. It was front page news, back page news. It was everywhere. No member of the public could go to hospital unless they were critically ill. This wasn’t just a personal battle between Dr Govinda and Dr Sharma over who would crack first. This was affecting every single person in the country. Farmers and sherpas were coming from the furthest stretches of Nepal to access the free clinics run by volunteer doctors which were only available in the major towns. This country was in crisis.

“Who is this guy?” we thought. “Dr Govinda must be one of the most hardcore medical administrators who ever lived.” We did some snooping around and found out the brutal reality of life in some parts of the world, and how this can breed amazing individuals.

All the following were researched from Nepalese newspapers.

Dr KC Govinda is a 55 year old man with no wife and no children.  He has dedicated his life to social and political justice, not just in Nepal, but around the world.

“Twice a year he travels to remote parts of Nepal, spending weeks conducting field clinics where he performs operations for those who can’t get to hospitals because they have sustained serious injuries during falls from trees and cliffs.”

“KC has travelled to all 75 districts of Nepal and run medical camps in 60 of them, all of them from his own personal expense.”

“In the past 16 years, the doctor has been to 72 districts of the country to avail villagers of his free service and medicine. The selfless trips have not been entirely been free from danger, especially during the Maoist conflict. Unable to believe his identity and his intent, some people called him a guerilla, while others called him a government spy. Once, he was put in the confines of a house for 19 hours. At other times, villagers refused to give him food believing that he was a Maoist.”

“In 2001, when a devastating earthquake hit India’s western state of Gujarat, KC spent three weeks in Bhuj treating the injured. He has also treated survivors of the 2005 earthquake in Pakistan, where he returned last year to help flood victims. In 2008, he went to Burma to help survivors of Hurricane Nargis and in 2010 he was in Haiti after the earthquake where he performed 232 operations in three weeks.”

We soon realized that this was not a cry for attention, or a light hearted publicity stunt. This was real. Justice and equality was real for Dr Govinda, as it was for many people living in these 2nd and 3rd world environments. We learned that this was not the first hunger strike Dr Govinda had participated in.

“Wow,” we thought. “We have a lot to learn about the world.”

There are some scarily real and courageous people out there.

There are some scarily real and courageous people out there.

We started working with the neurosurgery team and had a fantastic elective. But the memory of Dr Govinda and his struggle for social and political justice will always be remembered. Never will we forget the type of courage it takes to elicit change – locally and internationally. It’s hard, it takes work. But it can be done. People like Dr Govinda are a living testament. 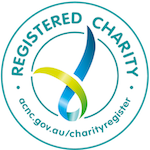